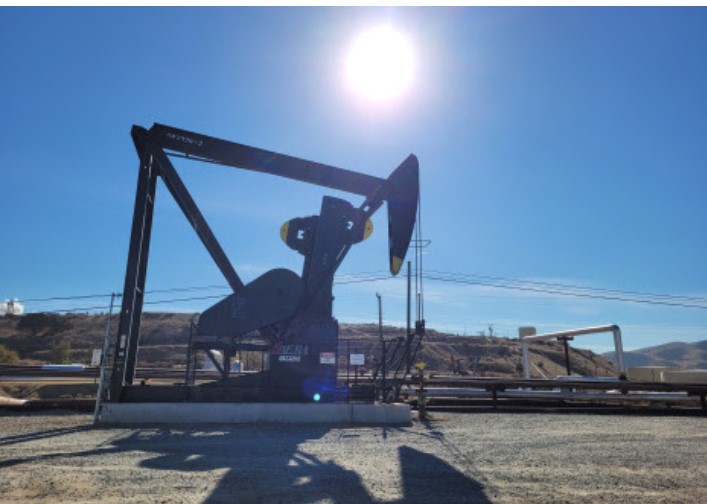 When petroleum companies draw crude oil from the earth, it is accompanied by large volumes of water. This wastewater is then pumped through wells thousands of feet deep into the earth. A recent study links seismic activity around the San Ardo oil field to the use of wastewater injection. (Nikk Ogasa — Special to the Monterey Herald)

SAN ARDO — For decades, oil operators in the Salinas Valley have been shooting water deep into the earth. Now, scientists believe that activity may have been triggering earthquakes.

A recent study links seismic activity around the San Ardo oil field to the use of “wastewater injection.” When petroleum companies draw crude oil from the earth, it is accompanied by large volumes of water. This wastewater is then pumped through wells thousands of feet deep into the earth.

The research is not the first to tie earthquakes to wastewater injection. More than a thousand miles away in the Sooner State, the link is well accepted. In 2016 the largest earthquake in Oklahoma’s history, a magnitude 5.8, struck near the city of Pawnee, damaging structures up to 300 miles away and prompting the Pawnee Nation to declare a state of emergency. Scientists believe this quake and thousands of others in Oklahoma were triggered by wastewater injection.

But in a statement to the Herald, the Western States Petroleum Association said it would be out of place to compare seismic activity in California to what is taking place in states like Oklahoma, because of differences in geology and oilfield activity.

Responding to the Association’s claim, the study’s lead author, Thomas Goebel, said “faults don’t care if they are in Oklahoma or California. Earthquake physics and triggering processes are the same everywhere.”

Goebel, a professor of seismology at the University of Memphis, and Manoochehr Shirzaei, a professor of geophysics at Virginia Tech, took a close look at more than 40 years of wastewater injection data and 1,735 local earthquakes.

What they found was that earthquakes in San Ardo tended to occur near wastewater disposal wells and that changes to the rates of wastewater injection were shadowed by changes in earthquake activity, with a delay of around 13 to 17 months.

A similar delayed response is described by studies of the quake-injection connection in Oklahoma.

A recent study links seismic activity around the San Ardo oil field to the use of wastewater injection. (Nikk Ogasa — Special to the Herald)

Before 2008, the Sooner State was relatively quiet in terms of seismic activity. But over the last decade, oil operations have dramatically increased their use of wastewater injection. And in that same period of time, the state has experienced an explosion of earthquakes.

According to the United States Geological Survey, the majority of quakes in Oklahoma are caused by the injection of wastewater into the ground.

Wastewater and fracking fluids can trigger, or “induce” earthquakes because they’re forced underground at very high pressures. They squeeze their way through pore spaces and fractures in the rock, which are themselves already under immense tectonic stress.Like the surface of an air hockey table, which shoots air under the puck to lower friction and help it slide smoothly, pumping high-pressure fluids into underground faults and fractures makes it easier for them to slip and produce earthquakes.

But as stated by the USGS, wastewater injection is far more likely than fracking to trigger earthquakes. That is because compared to fracking operations, wastewater disposal wells pump larger volumes of fluid, for longer periods of time.

Goebel and Shirzaei also looked at satellite imagery and found the valley floor was rising, in some areas more than half an inch per year. According to Goebel, this is evidence that pressures underground are out of balance, forcing the earth to expand.Oil operations in California are typically associated with the ground sinking, noted Joern Kaven, a geophysicist from the USGS. “Here, you actually see inflation, so there’s a lot of wastewater that is getting injected.”

The Western States Petroleum Association, which has represented oil operations in California for over a century, rebuked the conclusions of Goebel and Shirzaei, pointing out earthquakes are common and natural in California. The Association further pointed out that the San Andreas plate boundary, a tectonically active feature, sits 22 miles east of the San Ardo oilfield.

But Kaven, who was not involved with the research, said it would be strange for the San Andreas fault to trigger so many earthquakes at the distance the oilfield sits.

In their study, Goebel and Shirzaei show wastewater injection and earthquake rates are strongly correlated, and this link included earthquakes up to 15 miles from the oilfield. When they tried to factor in earthquakes along the San Andreas into their calculations, the correlation weakened.

The researchers also noticed that earthquakes appeared to crowd near the oilfield, with fewer quakes in the zone between San Ardo and the San Andreas.

According to Goebel, these observations support the conclusion that wastewater injection is triggering earthquakes in the San Ardo area.

The San Ardo oilfield last came under the spotlight in 2016, when 56% of Monterey County voters passed Measure Z, which banned fracking, wastewater injection and the development of new oil and gas wells in the county.

But after a lawsuit was filed by oil companies, much of Measure Z was invalidated — only the ban on fracking was preserved. Today, pumping wastewater into the ground is still legal.

An appeal to restore Measure Z is currently awaiting review in the appellate court. Its supporters are hoping to reinstate the bans on wastewater injection and new oil and gas well development.“It was pretty outrageous that a judge would overturn the vote of people,” says Andy Hsia-Coron, co-founder of Protect Monterey County, the grassroots organization behind Measure Z. “There’s plenty of precedent for curtailing these kinds of activities.”

In fact, that precedent can be found right next door.

In 2014, neighboring San Benito County made history by passing the first fracking ban in the state. The pioneering initiative, called Measure J, also banned other “high intensity” petroleum operations in the county, such as wastewater injection.

But with no court date scheduled for Measure Z’s restoration, it appears that the wastewater will continue to flow into the earth.On the future of earthquakes in the San Ardo oilfield, Goebel said: “the expectation is that what happened over the previous 40 years, the same will hold true for the future if injection continues.”